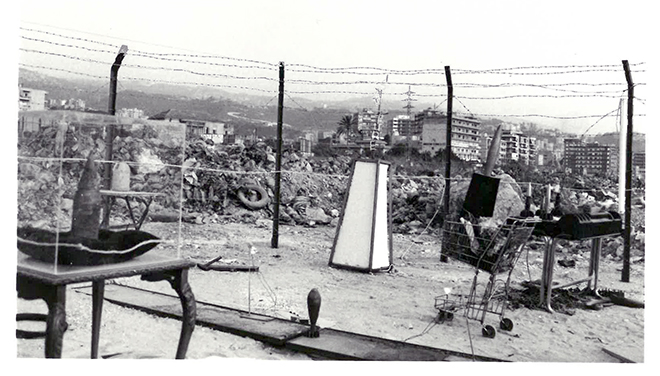 For his installation, the artist emptied an area of roughly twenty square feet, enclosing the space with barbed wire. The enclosure was lit by a noisy portable generator, common during the war, and was filled with several found and fabricated objects. These were objects of war detritus – scrap metal, bullets, engines and military equipment – and sculptures the artist produced while working as an apprentice in Beirut’s metal shops. This arrangement, which included the artist’s missile sculptures paired alongside found ones, blended seamlessly within its environment and gave voice to an aesthetic of refuse. Objects previously violent and threatening appeared drained of their potentiality, shrinking impotently in size as their force moved from the physical to the psychological. Abillama’s repurposing of artifacts of war served to foreground their psychic character, and in this way, the objects occupied an alternative temporality; presented in a discarded and fragmented state, the objects at once became devoid of their lived momentum and were reconstructed anew as historical referents. Working with the extant conditions of Beirut’s urban landscape, instead of against them, Abillama’s project made two significant gestures towards acknowledgement and acceptance; Abillama made work out the city’s waste, beginning with the residues of war, in order to then accept its ruinous state as a contemporary reality to build from rather than destroy.