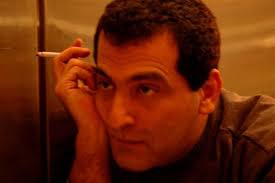 
Bilal Khbeiz (b. 1963, Lebanon) is a poet, essayist, journalist, and artist. “My intent is to indicate that we do not defend the land in which we live or from which we originate by choosing to believe in its founding myths. In fact, these myths are what shackle us, provoke our premature deaths, and haunt us like the tireless fates from one generation to the next. When overdetermined by roots and origins, we often seek facile beliefs as an exit from the incongruities of what we are and who we would rather be.”

The water is cool in the café