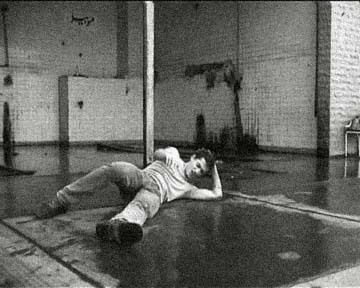 Rupture as violence is the element of violence where the loss of the other is possible, where loss is constantly in question. This violence can be projected unto every act at that ambiguous instant where the real and the non-real are confused, and where even though it can be endlessly re-enacted, violence presents itself as a unique and undeniable truth. Here it lies between two separate bodies – a man and a woman – each perpetuating a vain act revealing the impossibility of their being. A man falls many times and does not die, though he also never stops falling, never stops dying. A woman runs, coming towards us again and again. they are icons, now the reconstructed present of a past, of an origin we can no longer recall. Did they ever exist?

Voices of a Forgotten Network