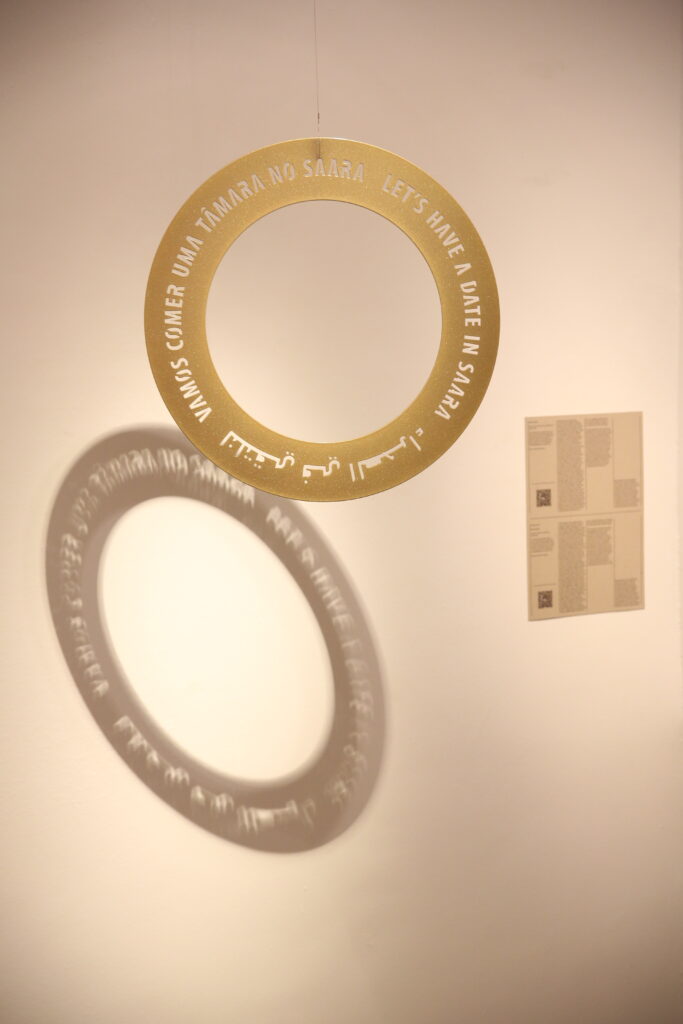 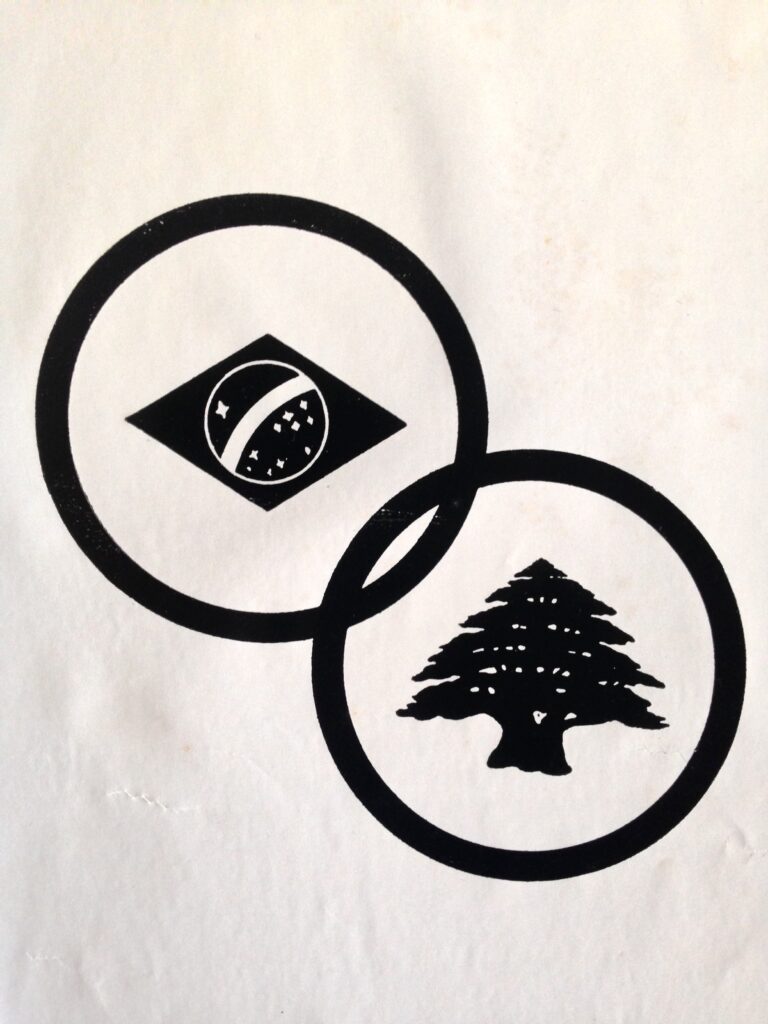 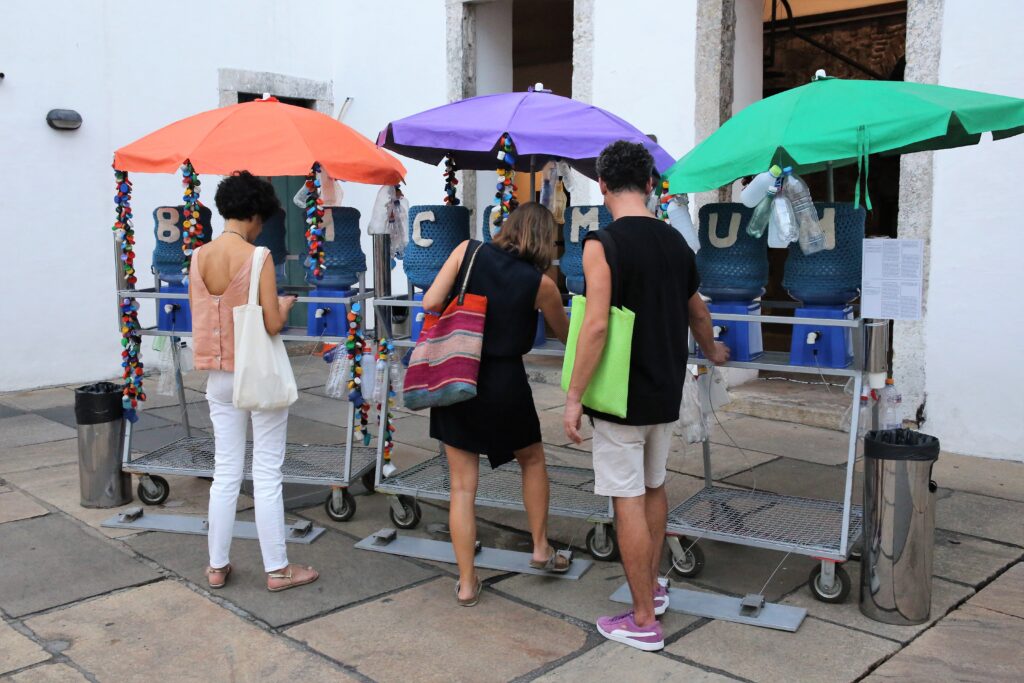 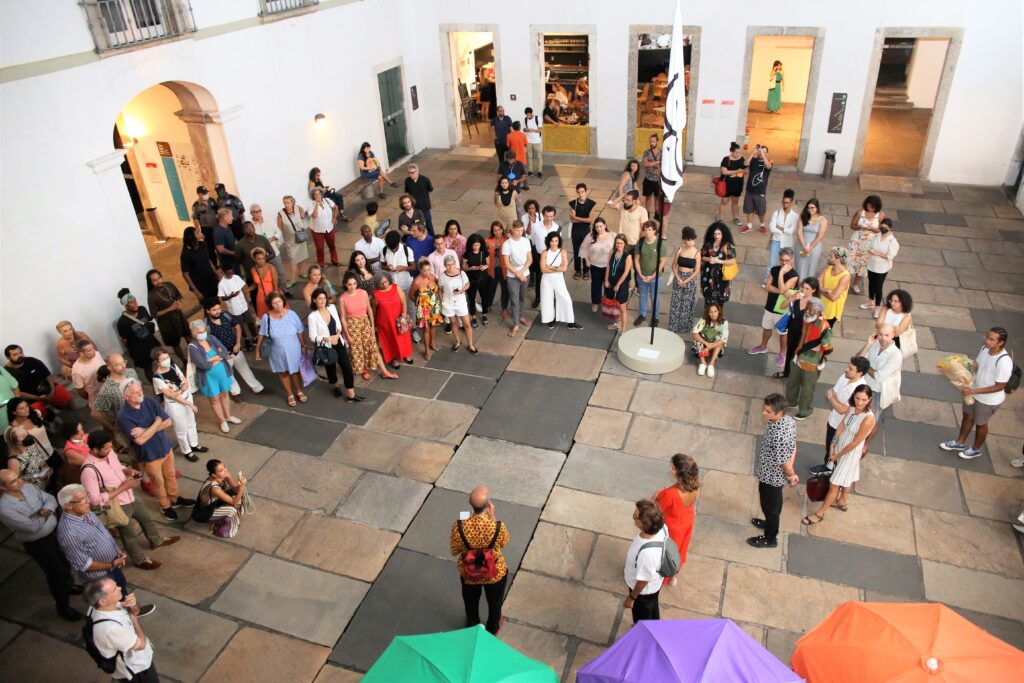 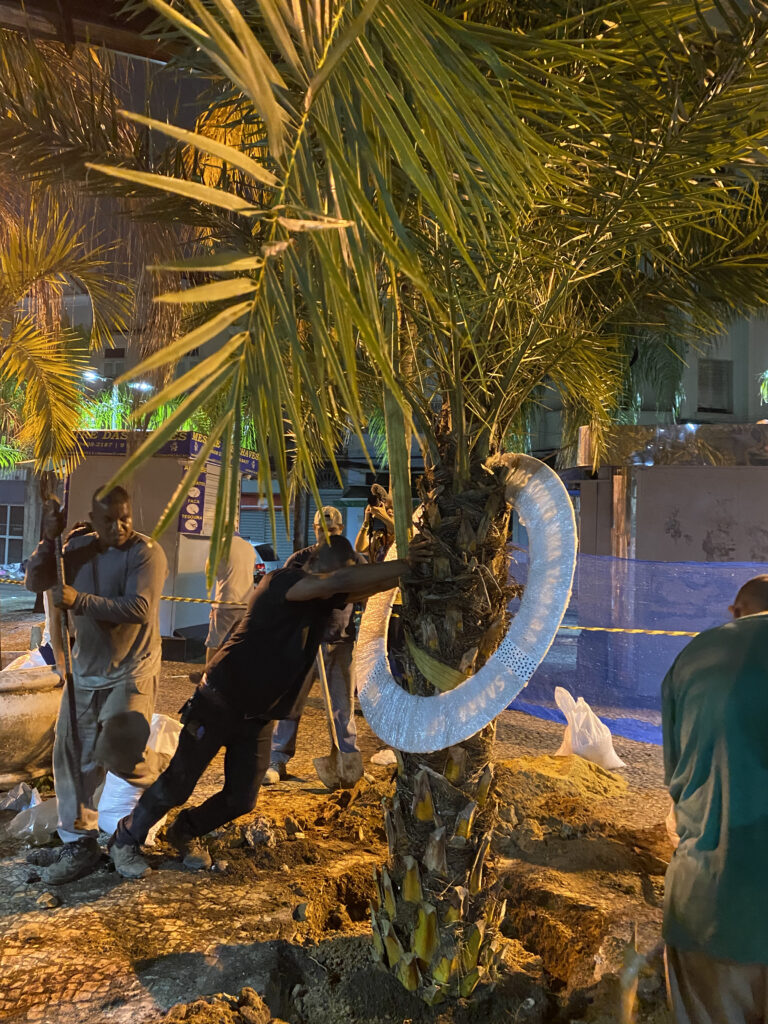 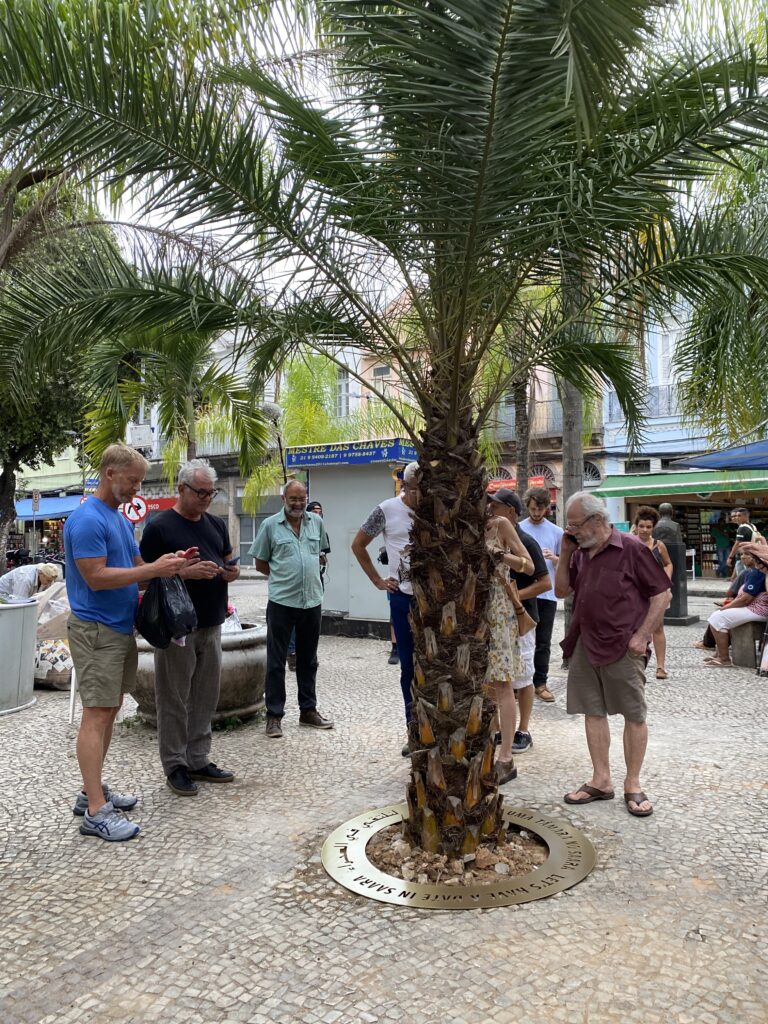 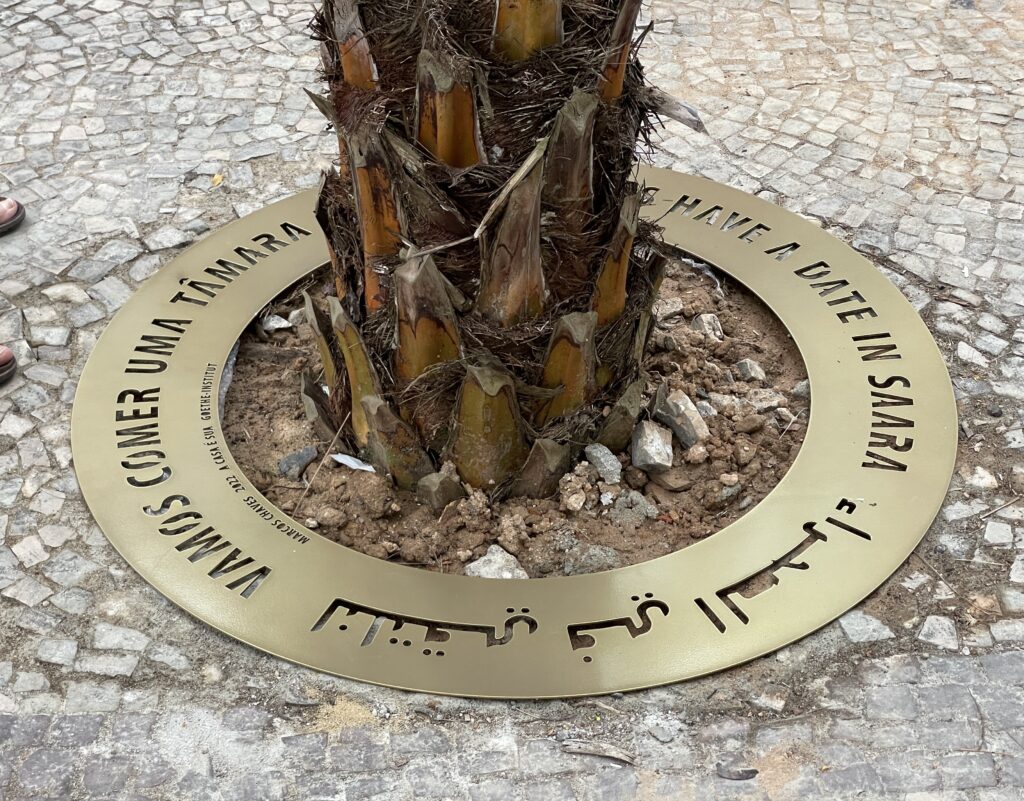 The ancient Greeks had their particular concept of hospitality contained in the word Xenia, in the Latin form of hospes, simultaneously meaning: host, guest or stranger. The notion of hospitality implies hostility as it presupposes the presence of the “other”, “outsider”, “stranger”, “foreigner” or “guest”. Therefore Jaques Derrida coined the term hostipitality.

In Arabic, Dayāfa is the word for hospitality; a virtue of welcome and generosity largely described in pre-Islamic poetry (Al Jahiliyya) and rooted in Bedouin practices to ease the difficult living conditions of the desert for the traveler or the guest. Arabs’ pride in the practice of hospitality lies in both duty and honor: It is said that the host must welcome and feed the guest for three days and three nights, after which his obligation is fulfilled and the guest is asked to “make (her/him)self at home’’.

‘A Casa é Sua: Migração e hos(ti)pitalidade fora do lugar’ curated by Amanda Abi Khalil is the exhibition component of a South-South cross-cultural exchange ongoing since 2017, mainly between Lebanon and Brazil. The project looks at hospitality and the tensions in guest-host relations from the perspective of historical and contemporary forms of migrations specific to these two southern global contexts and resonating with wider global xenophobic practices towards the other, which does not only refer to the refugee or the migrant.

The exhibition’s methodology was always intended to be context-responsive and, since 2017, has been imbued and traversed by several tragedies and political upheaval which caused its first postponement, followed by a pandemic resulting in a second deferral. Though the exhibition was delayed, the project was able to formulate two alternative gestures of radical hospitality during these difficult times: Make Yourself at Home: Radical Care and Hospitality, an emergency relief residency which took place in October 2020 in the aftermath of the Beirut Port Explosion, and Bem Comum, a public mobile fountain now finding its home on the patio of Paço Imperial for the length of the exhibition.

The culmination is an exhibition featuring the works of nineteen international artists and collectives, including six site-specific interventions commissioned by TAP in public spaces in the city of Rio de Janeiro.

Download the exhibition reader to learn more about each intervention.

A Casa é Sua: Migração e hos(ti)pitalidade fora do lugar brings forth topics which challenge western misplaced ideas on hospitality and guest-host relations when applied in contexts such as Brazil, Lebanon, Palestine or the Caribbean. The ways in which this project has allowed for permeability and transformation in response to current political issues, social needs and pressing themes relating to hospitality is an experiment of curatorial nature, in many ways positioning the exhibition as a host and a guest in relation to the context it is taking place in.

The hosting institution, Paço Imperial – an iconic building in the history of Rio de Janeiro where kings of the colonial period settled residence by making themselves at home – is also the place in which the law definitely banning slavery from Brazil was signed (lei Aurea). a hundred years ago. A Casa é Sua invites the public to turn the space of the exhibition into a temporary home where affect and relations allow for imaginaries and radical gestures to emerge; where desires of Quilombos and living together with the other are manifested.

In November of 2017, people from across Beirut gave their voices to a number of objects in the collection of the National Museum, which were then used to create a uniquely contextual audio guide challenging the authority of official history.

A one-month artist residency in the village of Ras Masqa focused on the theme of “art education”, to create bridges between the informal education formats of artistic practice and research, and the academic program of the Lebanese University.