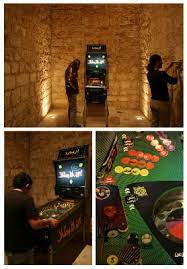 The time of heroes

Vartan Avakian’s work exhibits an obsession with mechanics and the process of production and reproduction, especially as it relates to pop culture. Set in the late 80s and early 90s, the period of transition between war-torn and post-war Lebanon, Avakian’s interactive pinball machine The Time of Heroes combines both of these interests. Seen through the eyes of a young boy reliving his civil war and early post-war memories, elements from daily life at the time unfold into a surreal mechanical game of action lm-like scenarios. The Time of Heroes captures the feeling of helplessness experienced by Avakian and others in Lebanon during this transition – a sensation of being ung like a pinball between factional ghting one day and a new government’s declaration of its end another, the cold war in one instance and the disintegration of the Soviet Union the next – in a medium all too familiar to the artist from his youth – the pinball machine. – Nadia Christidi

This Sea is Mine